Industries as diverse as aerospace, automotive, industrial heavy equipment and medical devices depend on precision grinding applications (surface, cylindrical, gear, creepfeed, centerless) to produce increasingly challenging geometric design parameters and surface finish requirements. Products including camshafts, crankshafts, medical pins, vanes, blades, blisks, bearings and gears are using materials that are more difficult to grind. In addition, the parts are becoming smaller and larger, the tolerances are more exact and the finishes required are getting finer. Grinding machine and wheel manufacturers are being asked to provide new technology and expertise in order to meet these needs.

The primary products for all of these precision grinding applications are vitrified grinding wheels (many with intricate face geometry) and segments (Figure 2.1).

Vitrified abrasive products have two major components, abrasives and bond (Figure 2.2). The abrasive is the cutting tool portion of the wheel while the bond holds the abrasive in the matrix to form a wheel or segment. The space between the abrasive and the bond is referred to as the structure or porosity of the product.

A substantial amount of work has been done over the last 20 years on the cutting tool portion of the wheel, the abrasive grain. Standard white aluminum oxide (Figure 3.1) (with selected color variations for off-white, pink, red) was the product of choice for over 50 years due to its very friable (sharp/easily broken down) nature. In 1990, Norton Abrasives introduced the first ceramic alumina abrasive, Norton SG (Figure 3.2). This new grain offered much higher performance in all areas of precision grinding as a result of a combination of the hardness of each ceramic alumina grain and the new science of “controlled micro-fracturing”. The ceramic alumina grain fractures at a controlled rate which provides two distinct advantages over aluminum oxide

The resulting benefits were a continuously sharp abrasive that cut up to 100% faster without burning very hard and difficult to grind materials and provided up to 300% life improvement due to the superior utilization of each grain.

Improved iterations of ceramic alumina grain were produced from 1990-2006. In 2007, Norton Abrasives introduced Norton Quantum ceramic alumina abrasive which was a substantial leap forward in grain technology and is the standard in the precision grinding industry for over six years. 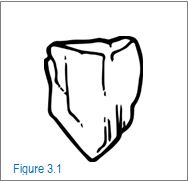 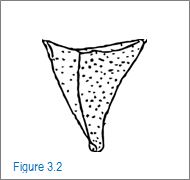 The vitrified or glass bond is the material that holds or bonds the abrasive grain together. The process of firing precision wheels was invented by Norton Abrasives in the 1880’s as part of the industrial revolution. Process improvements and materials have changed to improve the performance and consistency of vitrified bonds, but the basic technology has remained the same. The image (4.1) shows a representation of the grain being held in a matrix by “bond posts”. The heavier the bond-to-grain ratio, the harder or stronger the wheel is and the more pressure needed to break down the bond to release new abrasive grain for cutting. The correct balancing of bond-to-grain ratio is necessary to provide the enough holding power for the grain to perform the stops cutting and starts to burn or damage the work. For some materials or in some wide contact areas, artificial media is introduced into the matrix which burns out during firing to leave a large porous structure (4.2) which promotes better coolant flow which retards the dulling of the grain and resulting burn. 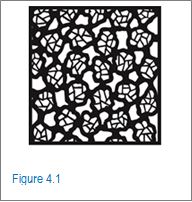 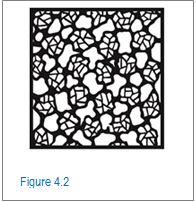 The chemistry of holding the abrasive grain in the bond matrix for the precise amount of time is referred to as “grain adhesion science”. Norton Vitirum3 is a revolutionary new product formulation that substantially increases the module of elasticity or strength of the bond. This allows for less bond to be used to provide the same holding power on the individual abrasive grain. Figure 5.1 shows bond posts on a standard vitrified wheel. Figure 5.2 shows how a stronger bond can result in thinner bond posts. 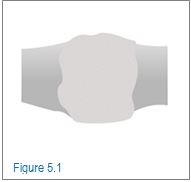 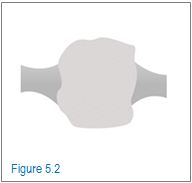 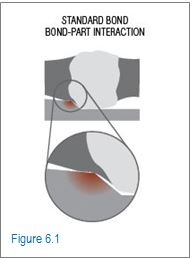 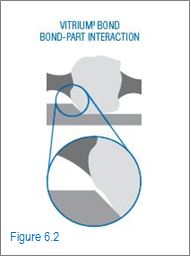 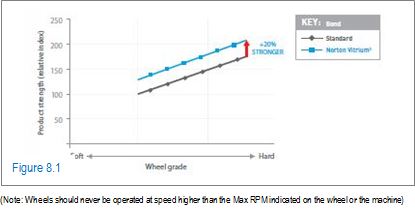 By choosing Norton Vitrium3 technology for your grinding operation, you help to preserve the environment.

Total cost reduction is the goal of all manufacturing organizations. While on average, abrasives consumables only account for about 3%, machinery and labor account for 58%of total manufacturing budgets (Figure 9.1). With a 20% decrease in cycle time per part, there will be a reduced total cost per part of more than 15%.

Learn how Farécla products are improving the aftermarket polishing process, increasing efficiency and cost savings in the prime automotive space.

Grinding wheels play an important role in many applications and are one of the most commonly used abrasive products. Discover how they’re made, and learn how to decipher your wheel's specification.

Coated abrasive belts are used in a number of diverse applications, requiring different belt joining designs and technology. Learn about the types of joints, joining tapes, and how they’re used.

We use cookies in order to improve site performance, offer you a better browsing experience and enable you to easily share content. Cookies are pieces of information stored on your computer in simple text files which our server can read and record. These files do not contain any sensitive information. By continuing to browse our site, you agree to the use of cookies.

I Agree Find out more